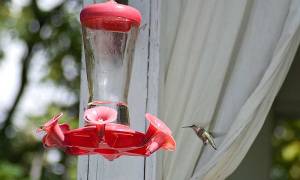 Ruby-throated hummingbird feeding outside of Haselwood Inn B & B

I spent some time out at the Haselwood Inn Bed & Breakfast this weekend, where with a little help from a hummingbird feeder, some pretty nice flowers, and thirteen acres of natural landscape, the ruby-throated hummingbirds are prevalent. Apparently last weekend there was a migration through the property. What is it about these tiny birds that so captivates us and what is the biology and physics behind it?

It’s hard to say what you notice first about a humming bird. To find them, the hum is a pretty good clue. The hum comes from the rapid wing beats that allow them to fly up to 100 km/h, hover, and reverse. Depending on what source you look at they beat their wings anywhere from 53 times a second to 75 times a second. What happens is the air gets caught up along the edge of the wing; this causes turbulence that result in a sound wave. Most birds make noise as they fly, they just don’t flap as quickly therefore they don’t produce the same humming noise. Owls on the other hand are known as silent fliers because of the way their feathers form.  The leading edge of an owl feather is serrated, think of holding your hand with your fingers slightly apart from each other. This breaks the turbulence down into smaller microturbulences, then there are some softer feathers that this air passes through that muffles the small turbulences, resulting in silent flight: a pretty good adaptation for a nocturnal predator. The hummingbird doesn’t need silent flight because the flowers aren’t likely to run away when they hear them coming. They do however, benefit from being able to hover as they use their long bills and tongues to lick up nectar from inside the flowers.

So what about the muscles that allow the hummingbirds to hum? In humans we talk about fast twitch versus slow twitch muscle fibres. Fast twitch tend to dominate in the bodies of world class sprinters – they can use lots of energy in really short time periods. Slow twitch tend to be found in greater concentration in endurance athletes – they aren’t necessarily fast out of the blocks but they can use aerobic energy (with oxygen) for long periods of time. Incredibly hummingbirds seem to be able to do both. They beat their wings so quickly you can’t more than a blur and they can migrate over a thousand kilometers. Unfortunately, it can be difficult to test out how an animal does their incredible feats but one group of researchers looked at the mitochondrial respiration in hummingbirds.

Mitochondria are found within cells. They are extremely small structures that make most of the energy that organisms need to function by breaking down specific nutrients, one of the most common being glucose (sugar), in the presence of oxygen. This releases the energy from the glucose and transforms it into a form that the body can use (ATP). So how did hummingbirds compare to mammals? According to the researchers, during flight the hummingbird mitochondria were operating at respiration rates two times higher than that of mammal muscular mitochondria operating at their maximum aerobic capacities (VO2 max); they also have higher densities of capillaries which are the blood vessels that deliver oxygen and remove carbon dioxide within muscles and other tissues compared to mammals. Just like the marathoner who will never run the 100 meters as fast as a top sprinter; mammals will never achieve the respiration involved in being a hummingbird, at least not with our current biology.

Hummingbirds are also known for their iridescent colourings. This is actually created through a pretty complex series of air bubbles and some other materials that reflect, refract, and amplify the light hitting the feathers. As the light comes off of the different surfaces of the air bubbles the waves will meet up. However, if the waves are out of phase with each other they will cancel each other out (destructive interference). Wavelengths that are in phase will undergo constructive interference and that is the colour that will be seen. This is different than most birds and other animals where the colour is caused by an actual pigment in the fur or feathers. You can learn more about this at sibleyguides.com.

All this is wrapped up in an animal that is just a few centimeters long and weighs a few grams.

The Cornell Lab of Ornithology http://www.allaboutbirds.org/guide/Ruby-throated_Hummingbird/id

How can owls fly silently? http://animals.howstuffworks.com/birds/owl-fly-silently1.htm

The basics of iridescence in hummingbirds http://www.sibleyguides.com/2011/09/the-basics-of-iridescence-in-hummingbirds/

I am passionate about making science, sustainability, and sport accessible through engaging information and activities.
View all posts by Tai Munro »
« What goes into a dragon boat line up – part 2
Starting the new school semester with a power pose »